Learn the calligraphy culture and world

Collection of about 25,000 items including art and cultural works, featuring Chinese calligraphy and paintings 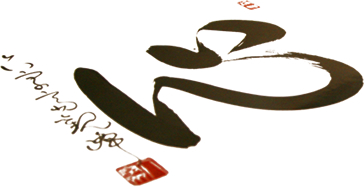 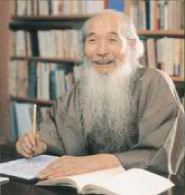 Kampo Museum was named after the founder of Japanese calligraphy, Kampo Harada (whose real name was Kotaro Harada; Kampo was his pseudonym).
Advocating “proper and beautiful calligraphy of love,” Kampo Harada launched a business to provide correspondence calligraphy courses in 1953. Since then, the business has developed to cover the whole country.
In 1985, the organization operating the business was turned into the Japan Calligraphy Education Foundation, a public-interest corporation, and now runs calligraphy classes across Japan for many people to learn calligraphy by modeling Kampo’s works.

After the death of Kampo Harada in July 1995 at the age of 84, Kampo Museum was opened in October 1995 in Higashiomi-shi (former Gokasho-cho), Shiga to display a large number of cultural and educational materials including calligraphy-related materials that he took 30 years to collect.

The large room is a reproduction of Tanpakukeisei Hall, the “Hall of Simplicity and Sincerity.” This is the main hall in the large complex of Chinese imperial palaces and gardens known as the Mountain Villa; built at the beginning of the Qing Dynasty. In this temporary residential palace, the emperor fulfilled political duties while escaping the summer heat of the capital city. Tanpakukeisei Hall was built for the Kangxi Emperor (r. 1661-1722) and later rebuilt for the Qianlong Emperor (r. 1735-1796). The architecture is a magnificent example of the stately and sophisticated beauty of the Qing Dynasty era. It is also known as Nanboku Hall, a word derived from the wood used in its construction. The original hall was used to hold various official functions, to handle court affairs, and to receive foreign envoys. The doors, decorated ceiling and backrest of the throne are all carved with exceptional craftsmanship and are decorated with auspicious symbols. The framed board hanging behind the screen is an inscription written by the Kangxi Emperor.

At the entrance of the exhibition area, a pair of large lion statues welcome guests. Behind the lions is a giant ink stone. This type of ink stone is excavated exclusively in the region of the Xi River in China. On the back wall is a wooden framed sign for Hishosanso, the Qing emperors’ Mountain Villa. On the next wall is a masterwork painting of “The Old Pine” by Dong Sho Ping, a leading contemporary Chinese brush-and-ink painter. In the large alcove is the Museum’s collection of immense rubbings from Jitaishan Inscription and Shitai Xial Jing (Shitai Book of Filial Piety). There is also an actual size replica of a stone drum engraved in an ancient seal-style script. The atmosphere of the room is further enhanced by additional furniture and other Chinese objects. 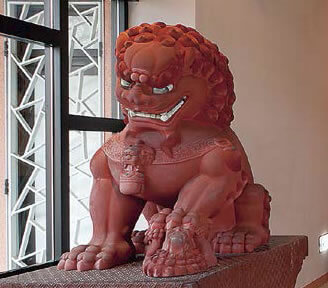 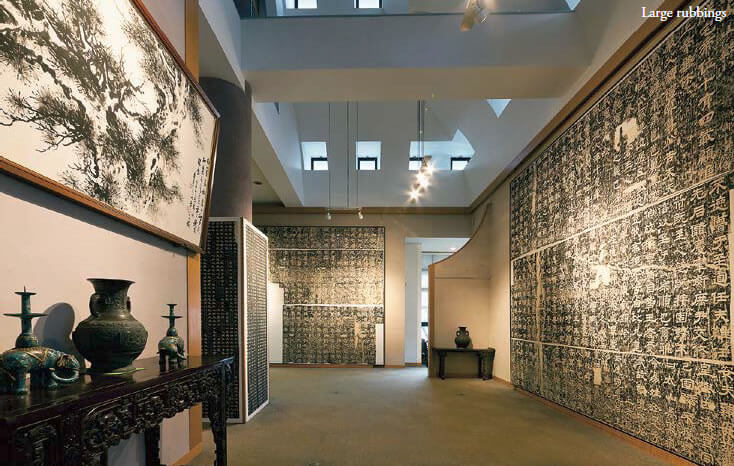 Displayed here, thanks to the extensive cooperation of the Xian Beilin Museum in China, are actual size replicas of eight stone steles that are of great importance to the history of calligraphy. These huge stone tablets with beautifully carved writing are fascinating and awe-inspiring objects to behold. Visitors are invited to try their hand at stone rubbing. Please inquire at the front desk.

This part of the museum resembles Siheyuan, a classical style of Chinese house. In this style, a central courtyard is surrounded by buildings on all four sides. A traditional garden graces the courtyard. In one corner is a reproduction of an emperor’s writing alcove, the Sanxitang. 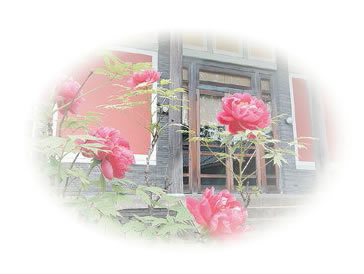 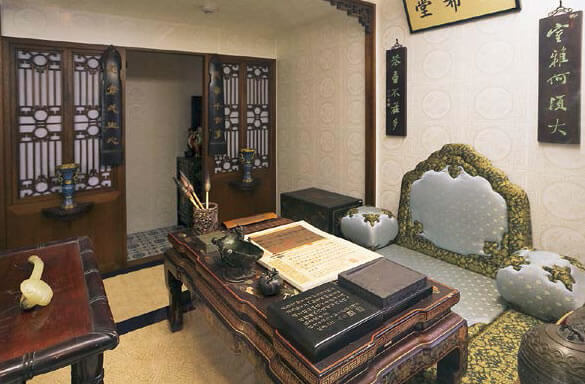 The Sanxitang is a small study situated in the Hall of Mental Cultivation in the Forbidden City of Beijing (now the National Palace Museum). It was used by the Qianlong Emperor (r. 1735– 1796). This tiny room is only 3.3 square meters (about 35 square feet). “Sanxitang”, Room of the Three Rarities, was named after the fact that three extremely rare and highly respected writings of 4th century scholars came into the hands of the Emperor. In the study, there is a low desk made of rosewood on which writing implements are displayed. Above the desk is a plaque with the word Sanxitang in the handwriting of the Qianlong Emperor.

This room showcases a variety of curious items from around the world. There are precious antique music boxes, classic cars, a square piano, French rococo furniture and old maps of the world.

Get off at JR Notogawa station → Take Ohmi Railway Bus (towards Yokaichi) and get off at Kondo Tatsutaguchi stop → Walk approx. 15 minutes (approx. 25 minutes in total) Get off at Ohmi Railway Gokasho station → Walk 10 minutes